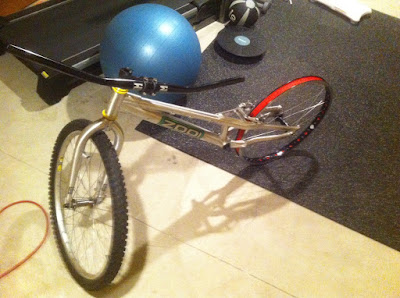 This is what a partially built trials bike looks like! yay!
I finally received my wheelset from Britain yesterday so i of course had to take some pictures. Sadly I have not ordered tires yet along with lots of other parts that are in process still.

enjoy!
Posted by RallyGabe at 5:26 PM No comments:

Ah yes, the ever present call of being frugal.

Here I am, working on bicycles, and I am trying to cut corners and be a tight-ass(read- cheap!). Mind you I am not talking about a $10,000 carbon framed triathlon machine here: I am talking about a $180, 8 year old, Norco Evolution Trials bike! These bikes use off-the-shelf mountain bike parts for the most part so even "high-end" parts for these things are not expensive.

So the background for this particular adventure in cheapness is as follows: I bought a different Trials frame and started buying parts to put it together. In the process I got a bunch of used parts that were cosmetically worse than I had hoped for so I thought to myself, "Self, why dont you try your hand at customizing the Norco and maybe make a better trials bike out of that at the same time?"

Now my friend Bryan, who is the whole fault I got into bike trials thought this was a bad idea...but thats okay. You need to live dangerously sometimes.

Some of the parts I ended up buying were; a Hope Mono Trials front brake, which needed a caliper rebuild. An Echo TR rear 135mm hub with a sprocket still threaded on. A set of ZETA 170mm FFW crankarms.

The Hope brake was cosmetically poor, but looked to be complete. I ordered up a seal kit and piston cap tool from across the pond. These went together very well thanks to the fact that the brake setup was a vintage piece so it did not require some foolishy complex system to bleed the brake lines.

Next were the crankarms. For the most part these were okay arms but the removal threads on the right side were a bit buggered up. solution? Take the tool steel crank remover tool and put a 1/2" impact on it, run it in. TADA!: new threads.

The rear hub was now in the crosshairs. The problem was that the cog/sprocket was still threaded on to the hub so that I could not lace a wheel to it and turn the cog off. I tried some simple grabbing and vice-ing with no luck other than gouging the crap out of the flanges. :( 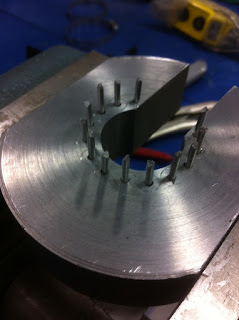 My realization was that I needed a better way to hold the hub while turning the sprocket.

This led me to the machine shop for an afternoon after i came up with a rough design. To the Right is the end product of that session. It looks fine and dandy but there is a flaw: Using the ParkTools chain whip didn't touch the darn thing at all. It simply flexed all over and made me angry at it. Heat didn't help, chemicals didn't help. I was at wits end.

I felt like I was close but i was missing some key component. I went over and spent some time browsing OTN for some inspiration. This led me to a thread about removing freewheels from crankarms. While not exactly the same it gave me the missing link:

These guys happen to have decent videos and are rather well known in the Trials circles as being pretty darn good.

Anyhow, the key I was missing was leverage! Getting stuck freewheels off in the past had never been this hard because i always had a wheel attached to the hub to put a huge amount of force into the system. Using the chain-wedge technique to hold the sprocket and a modification to my "tool" I got these suckers apart! 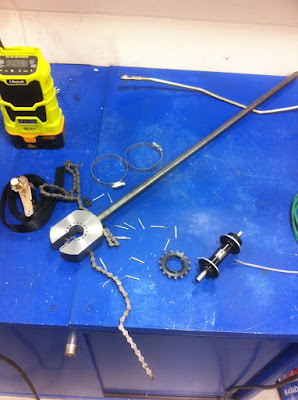 As of right now I have this neat little hub laced to the Alex DH32 rim that had been on the bike when I got it. Using $40 worth of DT Champion spokes that I got on sale I now have a trials-esque rear wheel with a total out-of-pocket expense of about $80. I also have now built my first wheel (okay I am still working on the trueing part but it is assembled at least)

Posted by RallyGabe at 5:23 PM No comments: